This project investigates the self-extinguishment mechanism of Cross-Laminated Timber (CLT) at a full-scale in order to establish design criteria for the re-safe use of CLT in tall-timber buildings.

The aim is to provide a methodology to establish criteria for self-extinguishment of Engineered Wood Products at a full- scale, considering complexities such as delamination failure, encapsulation failure, and rate of exposure of timber surfaces.

The research will evaluate fundamental self-extinguishment properties such as critical external heat ux and pyrolysis rate, in order to determine whether fully exposed timber compartments may achieve self-extinguishment if delamination is controlled.

The framework is intended to be validated using an experimental campaign based on large-scale compartment tests where the different failure modes can be isolated. The large-scale campaign explores critical conditions based on a parametrisation of the duration of the fire. The research is building a series of six to ten Cross-Laminated Timber (CLT) compartments that will be tested under fire conditions during 2019 and 2020.

The project is largely supported by a team of PhD students, academics, technicians, and undergraduate students from the Fire Safety Engineering research group (UQ Fire) and collaborators from the University of Edinburgh and University College London. It is running in parallel with Hangyu Xu’s PhD research project.

Further information about the project can be found in this link: https://sites.google.com/view/arc-future-timber-hub-pr14

Fire engineering researchers adding to the world’s knowledge of CLT
The second stage of the char fall-off study fire test at the QFES' White's Island Live Fire Training facility was completed on the 26 February for the Hub Project “Exploring the self-extinguishment mechanism of engineered timber in full-scale compartment fires”. This is the fourth test in the experimental series of large-scale tests in the ARC Future Timber Hub. The aim of the test was to demonstrate the occurrence of CLT self-extinction for a limited fuel load.
Additional Articles - TimberBiz - 1 April 2020 - Determining self-extinguishment characteristics of CLT

Increasing the awareness of engineered timber in fire testing
On the 1 November 2019 fire testing took place at the Queensland Fire & Emergency Services (QFES) Qld Fire & Rescue Academy, located at the Port of Brisbane, for the ARC Future Timber Hub Project “Exploring the self-extinguishment mechanism of engineered timber in full-scale compartment fires”.
Industry were invited to witness this test for the first time and included engineers from Arup, Core Engineering, EWP, Holmes Fire, Omnii, Red Fire Engineers, Walkerbai and WSP.  A crew from ABC TV's 'Catalyst' science documentary series were also on hand to film the fire test for their 2020 program about engineered timber. 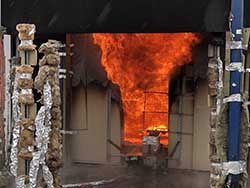